The 11 Smartest Dog Breeds To Adopt 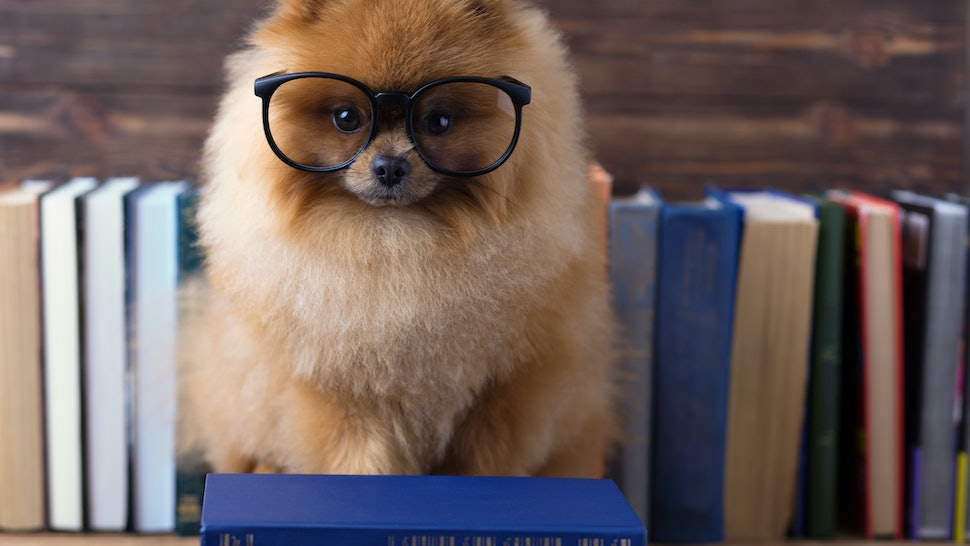 You could argue that all dogs are intelligent, in their own special way, thanks to the bond they share with us humans, and their adorable desire to impress us. But experts say some dog breeds are extra smart. Take poodles and golden retrievers, for instance, which are known for having a good rapport with people, without even having to try. And then there are the dogs that have been bred to be highly trainable, and stand out in that way.

It really boils down to how you want to measure intelligence. “Is it a comparison to other dogs, species, aspects, speed, precision, [or] accuracy? Oftentimes what is most important in what we commonly believe is ‘intelligence’ is motivation,” Russell Hartstein, CDBC, CPDT-KA, founder of Fun Paw Care, tells Bustle. Some dogs are motivated by their owner, and can learn to do pretty much anything when encouraged.

But there are other signs of intelligence to look for, including being alert and aware of their surroundings, making eye contact, pausing before acting, and paying attention, small animal veterinarian Laura Seabolt, tells Bustle.

With that in mind, read on below for some of the smartest dog breeds, in no particular order, as well as the unique traits that make them stand out.

“It doesn’t matter what size of poodle it is — standard, toy, klein, miniature, or teacup — they are all hyper-intelligent,” Robert Cabral, dog trainer and member of the Wag!advisory board, tells Bustle. “[Poodles are great] at retrieving and learning new commands in minutes.”

And that stylish haircut? It’s actually a sign of their sporting abilities. “This intelligent dog was originally bred in Germany for bird hunting and water retrieving,” the pet experts at Rover, tell Bustle. Shaving their hair in that “fancy” way actually helped them stay warm yet buoyant, as they dove into lakes to fetch animals. Pretty interesting, right?

“Border Collies are a herding breed that is very sensitive to the commands of their owner,” Seabolt says. “Often, owners simply make a sound or use a single word to direct their dog.” And just like that, they know what’s up.

“They are also very intuitive, especially when it comes to working with their herding animals,” she says. Border Collies don’t need much attention or direction from their person, in order to get the job done.

But this dog breed also does well outside of herding situations, such as in obedience and agility classes, where they’re known for being one of the smartest dogs around.

“The Jack Russell breed are feisty and energetic pups that love to be busy,” Cabral says. “They are surprisingly fast on their feet considering their size, and are super responsive to training and voice commands.” If you meet one, you’ll know that they’ve got a lot going on.

“This is one of the main breed of dogs that is used as seeing eye dogs,” Sara Ochoa, DVM, a veterinary advisor for doglab, tells Bustle. And for good reason.

“They have to be a very intelligent breed to be used for this purpose,” she says. “They can lead blind people across busy streets and around town, [and they can be] trained to fetch certain items in a person’s house, open and close doors, and help with everyday tasks.”

While other breeds can be taught these skills as well, it’s a golden retriever’s natural intelligence and desire to please that makes them up for the job.

Labradors are also super smart, just like other retriever breeds. “Labs have been known for their intelligence for many years,” Dr. Ochoa says. “This is a common dog used for hunting, [since] they learn very quickly how to retrieve.”

Of course, they’re still incredibly smart, even when they’re not in the woods. Labs are adored for their obedience, which is yet another way to measure intelligence, as well as how loving they are with family.

As Dr. Ochoa says, Australian Shepherds are very smart and energetic dogs. They’re often spotted in agility classes where they listen and respond quickly to commands.

“This is one dog breed that is very smart when it comes to herding animals,” Dr. Ocha says, which is where their intelligence truly shines.

“Most of these dogs don’t even have to be taught to herd,” she says, “they are just genetically inclined when there is a group of animals or people to herd them.”

It all goes back to what they were bred for. Some dogs are simply good at certain skills, without needing a human to tell them what to do.

Dobermans tend to make great guard dogs since they are always on alert, Dr. Ochoa says, which is one surefire way to measure intelligence. They also learn quickly, and can be quite impressive when it comes to learning commands.

This breed is active and intelligent, Rover says, as well as companionable and highly trainable. Experts tend to agree they’re one of the smartest of the toy dog breeds out there.

German Shepherds are incredibly loyal dogs. “They are eager to learn and please their owner, and they have a superb ability to control their impulses,” Seabolt says.

That’s why they’re often seen in high-pressure situations, such as working alongside law enforcement. “However, they are also wonderful family pets” Seabolt says, “and very sensitive to the emotions of their human family.”

While this breed may appear to be droopy and lazy, they actually “have a natural capacity to sniff out scents and track them down,” Cabral says, “and they don’t give in until they find what they’re searching for.”

Whether it’s learning commands, bonding with family, or impressing everyone with their natural instincts, experts say these dogs are some of the smartest around.