5 Habits That Make You More Likely To Dream At Night 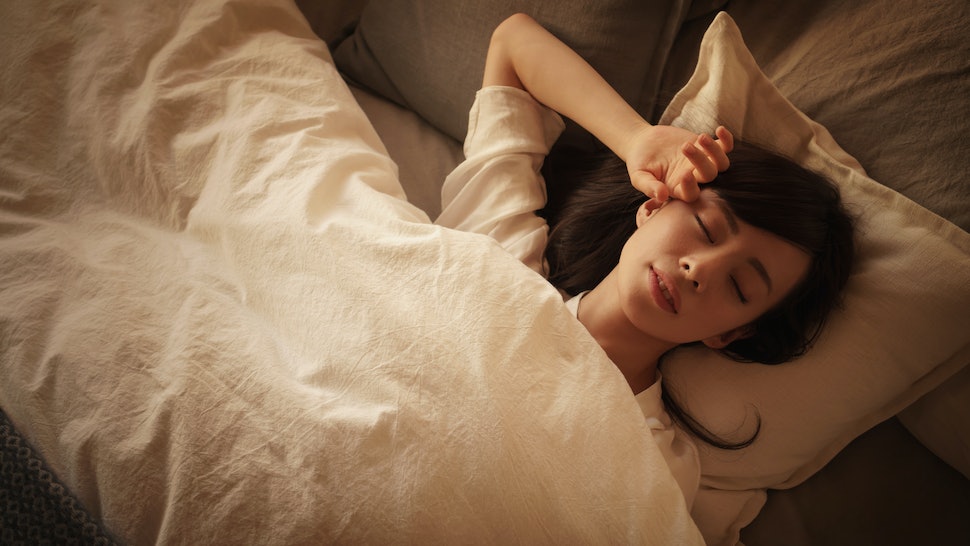 Some people remember their dreams more than others, as you’ll well know if you have that one friend who wants to tell you about her dreams without realizing that they’re boring to anyone besides herself. (Or, if you are that friend.) But, there are some habits that could make you more likely to dream and more likely to remember your dreams. The thing is, some of the habits that could cause you to rememberdreams more often don’t really promote a good night’s sleep and won’t necessarily cause more dreams.

Basically, there’s a difference between dreaming because you sprayed around some lavender essential oil and chose to go to bed with a book rather than a laptop, and remembering a dream because you ate too much queso dip and aren’t sleeping as well as you could be. So many things you do during the day can affect your sleep (Did you exercise too late? Did you take a nap? Drink too much caffeine?), and in turn, these factors can have an effect on dreaming.

Here are some common habits that can make you more likely to remember your dreams or to actually dream more. Before you eat a giant cheese plate at 11 p.m. to try to have otherworldly dreams, you’ll want to take a few things into account and maybe just try taking a bath instead.

Eating Foods That Upset Your Stomach

One of the foods most commonly thought to cause more dreaming — particularly bad dreams — is cheese. But it seems likely that eating cheese before bed isn’t causing the dreams, but rather causing people or remember their dreams.

According to Psychology Today, a study showed that of people who believe certain foods affect their dreams, many attributed it to dairy or to spicy foods. While the site points out that this could be because of the foods themselves (“due to general effects of food on mood and cognition”, as is the case while awake, too), it could also be that the foods are “influenc[ing] dreams indirectly due to poor metabolism or digestive intolerances.”

Sleep.org similarly explains, “certain foods can upset your body and wake you up throughout the night, helping you remember your vivid dreams more.”

As with eating certain foods, eating late at night can also affect metabolism and the state of one’s stomach, which could cause more waking in the middle of the night.

“Dining on a big meal just before turning in for the night boosts your body’s temperature and metabolism — two consequences that result in more brain activity during the REM stage (a.k.a. when you dream),” Sleep.org explains.

According to Cleveland Clinic, Jessica Vensel-Rundo, MD says drinking alcohol before bed “creates more fragmented sleep.” She explained, “There’s more disruption. Deep sleep decreases during the second half, and REM, or dreaming, sleep increases.” It could also lead to more vivid dreams or nightmares, and an increased risk of sleepwalking or acting out dreams.

That said, having vivid or bad dreams after drinking alcohol isn’t really desirable. In this case, yes, you are dreaming, but not exactly due to sleeping well.

In 2007, Scientific American published an article called “Strange but True: Less Sleep Means More Dreams,” which explains “REM rebound.” This is a phenomenon in which a lack of sleep one night will lead to increased time in REM during the next appropriately lengthy sleep. Neurologist Mark Mahowald explained, “When someone is sleep deprived we see greater sleep intensity, meaning greater brain activity during sleep; dreaming is definitely increased and likely more vivid.”

Doing Things To Help You Sleep Well In General

If rebounding from a bad night of sleep leads to more time in REM and more dreams, then it also makes sense that just sleeping well overall can lead to better sleeps with more time to dream. According to HuffPost, Dr. Shalini Paruthi, the director of the Pediatric Sleep and Research Center at SSM Cardinal Glennon Children’s Hospital, said that getting a good night of sleep is “the most important thing” one can do to dream.

As HuffPost explains, achieving this includes all the classics, like sleeping in a dark room with a cool temperature, reading a book, taking a bath, meditating, not exercising too late in the day, and not eating too much too close to bedtime. (This is in contrast to the items about food above. In those cases the food caused remembering the dreams, more than actually contributing to better sleep and more time to dream.)

Maybe recognizing whether you have some of these habits will come in handy, whether you want to stop remembering bad dreams or want to sleep more peacefully.