What Is the Psychological Power of a Dog’s Name?

It is a cocktail party and the room is filled with people engaged in many different conversations. Suddenly you think that you hear someone mention your name. You don’t recognize the voice of the speaker, but your attentionhas been caught and you focus in on that particular conversation, screening out all other sounds from your brain while you follow what is being said.

Names have that power for people, especially your first name. They have such a strong psychological pull that first responders in crisis situations (such as paramedics and firemen) are trained to find out the name of a person who appears to be wavering on the brink of unconsciousness so that they can use it when speaking to the injured person in order to see if there is any response. If there is even a flicker of consciousness, a person hearing their name (even spoken by an unfamiliar voice) will try to turn their head, or at least their eyes, in the direction of whoever is speaking their given name. 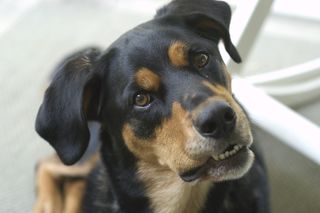 Does a dog’s name have the same power to attract and focus the animal’s attention? Dog trainers and canine behaviorists are divided on this issue. When I was first learning the basics of dog training I was always instructed to begin each command with the dog’s name. Therefore, the correct grammar when addressing a dog would be “Lassie come,” “Lassie sit,” or “Lassie down.” The rationale was that saying the dog’s name caught its attention and informed it that the next sound that came from your mouth was directed toward him. In beginners’ dog classes, especially if the room is noisy and there is a lot of activity, you can often observe the effects of not following that grammatical principle. When the novice trainer says “Down Lassie” instead of “Lassie down,” the dog often looks at the trainer’s face in confusion. You get the impression that the command (in this instance “down”) has gone unnoticed by the dog, but when it hears its name it catches the dog’s attention, and now he is looking at the human’s face. He is not responding to the “down” command, however: What seems to be running through the dog’s mind is something like, “Okay, you have my full focused attention. So what is it that you want me to do?”

However, many contemporary dog trainers would disagree. Their argument is that there is nothing special about a dog’s name. If the dog is already focused on you, then, they say, there is no need to use the name: Simply giving the command should suffice. They agree that saying a dog’s name will often capture the dog’s attention, but they disagree that there is something special about the name itself. They believe that the name is simply a bit of sound which alerts the dog to the fact that their trainer is uttering something. The importance of the spoken name is just that it is in the trainer’s familiar voice and that means it’s a sound that demands attention. According to this principle, any arbitrary sound preceding the command, even if it is meaningless and has no relationship to the dog’s name, would work just as well, as long as the utterance was produced in the trainer’s familiar voice. Thus you might as well say “Refrigerator come” or “Refrigerator down.”

Further, these trainers suggest that a dog’s name, spoken by a completely unfamiliar voice, should have little or no effect in capturing the dog’s attention.

A team of researchers led by Amritha Mallikarjun of the University of Maryland-College Park decided to test whether there really is an attention-getting power in a dog’s name, much as there is in a human’s name. They chose canine test subjects who averaged a bit over four years of age and had, therefore, heard their name continuously for a substantial amount of time.

To create the target stimulus, prior to the test visit, each dog owner was asked the name or nickname that their dog was most commonly called by. This name was then recorded, and repeated 15 times, by a female native English speaker from Eastern Pennsylvania. The idea was that the dog would hear either its own name or the name of another dog in the study spoken by the same unfamiliar female voice. In addition, as a background distractor, the researchers mimicked the sounds of a noisy party by having nine different women recording passages read from nine different text sources, all of which could be mixed together to form a backdrop drone of human voices.

The test situation consisted of a small booth in which the dog and its owner sat. On either side, there was a speaker through which the various sounds could be played. The notion was simple: If the dog’s attention was caught by a particular sound it was presumed to be highly likely that the dog would turn its head in the direction of that sound. A video camera mounted in the booth monitored the dog’s responses, and the videos were scored to determine how long the dog paid attention to a particular sound stream played on either of the speakers.

The dogs were presented with sound streams containing either their own name or the name of another dog repeated over a 22-second period. This was repeated for several blocks of trials. Contrary to the expectations of some trainers, even though the voice saying their name was completely unfamiliar, the dogs paid more attention to their own name sounds than to the sound of an unfamiliar name. Furthermore, even when the sounds of the dogs’ names were superimposed on a medium-level distractor stream of conversational sounds, the dogs would focus more on the speaker voicing their own name. In a follow-up experiment, the researchers made the sound level of the dog’s name and the sound level of the distracting background conversations the same, and even under those difficult conditions, the sound of the dog’s name had a strong enough psychological pull to cause the animal to focus most of its attention on the speaker producing it.

The results seem quite clear: A dog’s name has psychological power. It attracts the dog’s attention even when the name is spoken by a voice unfamiliar to the animal, and even when their name is competing with an environment filled with other human voices saying a variety of irrelevant things. This seems to suggest that the practice of preceding a command with a dog’s name is, in fact, a sensible and effective way of capturing the dog’s attention, especially in a noisy environment. The investigators conclude:

“Our study shows that generally, dogs will behaviorally respond to their name even if a sound source is not immediately clear. This has practical implications for working dogs, like search-and-rescue dogs that may need to take commands from someone other than their handler in emergency situations, and may need to do so at a distance, when the speaker is out of view….even in the context of multitalker background babble.”

Copyright SC Psychological Enterprises Ltd. May not be reprinted or reposted without permission