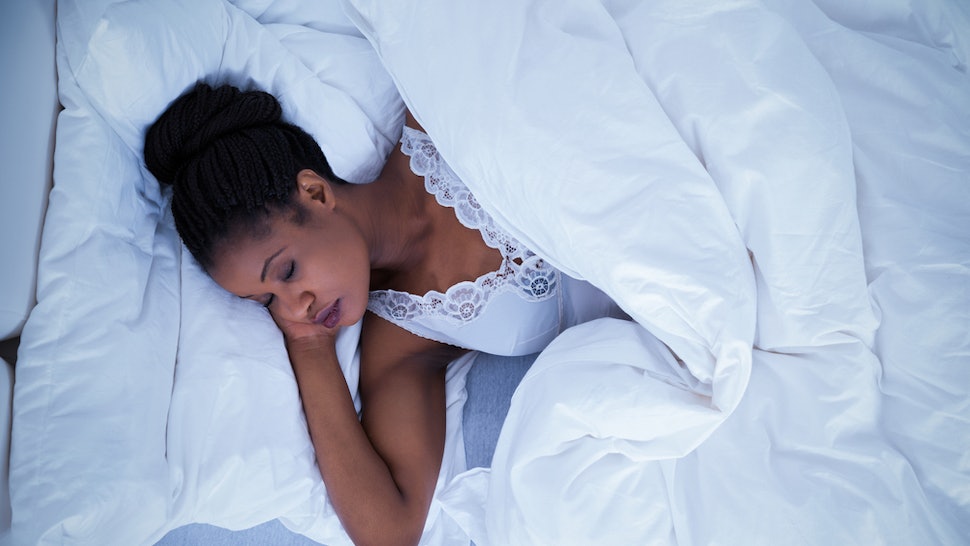 There are many things it could mean if you need more than eight hours of sleep per night. In some instances, snoozing the day away could be a sign of a health issue, such as an underlying infection or a mental health concern — which could keep you in bed past the typical sleeping times. But those aren’t the only things that could lead to an increased need for sleep.

“Doctors recommend that all adults get between seven and nine hours of sleep on a nightly basis,” Bill Fish, certified sleep science coach and co-founder of Tuck, tells Bustle “That variance depends on each individual, but if you aren’t getting at least seven hours of sleep, you are considered sleep deprived. That said, there are also times that we might need more sleep than our normal routine.”

If you have a cold, for instance, you’re going to need more sleep than usual as you recover. And the same may be true if you’re going through a difficult time in life, experiencing depression, if you’ve been exercising more than usual, and so on. It’s important to listen to your body, and get the rest you need. But it’s also a good idea to let a doctor know if you can’t get out of bed, or if you don’t feel well-rested.

Read on below for some possible reasons why you need more than the recommended eight hours of sleep per night, according to experts.

If you need more than eight hours of sleep each night, you might want to thank your DNA. “Some folks are just genetically inclined to need more sleep,” Matthew Ross, co-founder and COO of The Slumber Yard, tells Bustle. “Not every person shares the same sleep patterns and circadian rhythms.”

If you have a mental health concern, like depression, there’s a good chance it’ll impact your sleep one way or another.

“Depression can cause a desire to sleep too much, or it may cause insomnia,” Rose MacDowell, chief research officer at Sleepopolis, tells Bustle. “People with bipolar disorder might sleep too much during the depressive phase and too little during the manic phase.”

If you happen to notice any changes either way, it can help to let a doctor know.

“Hypersomnia is a classification of sleep disorders that includes narcolepsy, probably the best-known form of hypersomnia,” MacDowell says. And this can result in an increased need for sleep.

“Narcolepsy is caused by an autoimmune reaction that damages hypocretin, the brain chemical responsible for feeling awake and alert,” MacDowell says. “People with hypersomnia can sleep up to sixteen hours a day and still feel the need to nap.”

Sleep disorders that make it difficult to rest properly, such as restless legs syndromeand sleep apnea, can also cause you to need more sleep.

“Because both sleep disorders interrupt or prevent sleep,” MacDowell says, “sufferers may feel excessively sleepy during the day and spend an unusual amount of time asleep.”

The best thing to do, if you think a sleep disorder is to blame, is to make an appointment with your doctor. There are ways to overcome such issues, and get the sleep you need.

Some medications list sleepiness as a side effect, including “antihistamines, found in certain cold, motion sickness, and allergy medications,” MacDowell says. “Antihistamines cause sleepiness by blocking the effects of the brain’s natural histamines, which regulate wakefulness and sleep.” But other medications can do this, too. If you feel sleepier than usual, let your doctor know so they can help adjust your dosage, or switch you to a new medication that won’t be as intense.

Unexplained fatigue is one of the many symptoms of a chronic illness. “Common conditions include fibromyalgia, hypothyroidism, anemia, and rheumatoid arthritis,” Ross says. “People who suffer from conditions that result in fatigue and pain often require more sleep in order for their bodies to properly rest and recover.”

“If we are fighting some sort of cold or sickness, our bodies can become drained [from] exerting more energy than normal to fight the virus, and we may require more sleep than normal as we recuperate,” Fish says. When an illness is to blame, you’ll want to make time to get all the extra rest you need, until you feel better.

Have you been getting more exercise than usual? If you’ve just started running, training for a marathon, or lifting weights, and your body isn’t accustomed to this new physical exertion, Fish says you may need more sleep than usual until your body adjusts.

“One of the most common causes of acute (temporary) insomnia is stress and/or a traumatic event,” sleep expert and author CM Hamilton, tells Bustle. If you’ve recently been through a traumatic event — a breakup, a death in the family, etc. — you may be sleepless at first, and then super exhausted as your body recovers.

Young people tend to need more sleep than many older folks would deem appropriate. And yet, younger people require more sleep for a reason.

“Teenagers’ brains are developing at rapid rate and therefore require additional sleep, when brain development takes place,” Riki Taubenblat, a pediatric sleep consultant, tells Bustle. So if you’re young, snag that sleep while you still can.

“The most common reason to need more sleep than usual is because your body is trying to repay a sleep debt, which comes after a few days or weeks of consistent sleep deprivation,” Taubenblat says. If you haven’t been getting those seven to nine hours, you will feel tired — and need more sleep.

To catch up, try sticking to a more consistent schedule, where you go to bed and wake up at the same times each day. Eventually, your body will fall into a pattern, and you’ll hopefully feel more rested.

It is OK, though, if you need a little more or a little less sleep than the average person each night. But if you’re sleeping ten hours or more, or don’t feel rested, let a doctor know so they can help uncover the reason why.