“Try to pose for yourself this task: not to think of a polar bear, and you will see that the cursed thing will come to mind every minute.”
— Fyodor Dostoevsky, (Winter Notes on Summer Impressions, 1863) 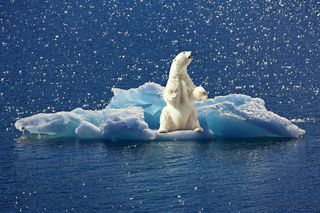 You can try Daniel Wegner’s famous “white bear” experiment on successful though suppression right now: As you’re reading this post, try NOT to think about this polar bear image.
Source: cocoparisienne/Pixabay

In the 1980s, Daniel Wegner (1948-2013)—who was a pioneering social psychologist at Harvard University best known for his groundbreaking research on thought suppression—stumbled upon the above-mentioned Dostoevsky “polar bear” quote, which inspired him to dedicate the rest of his life to deconstructing the best way to deliberately forget about something.

As Dostoevsky writes in Winter Notes on Summer Impressions, “Try to pose for yourself this task: not to think of a polar bear, and you will see that the cursed thing will come to mind every minute.” We all know from daily life experience that Dostoevsky is right: The more you try to forget about something or suppress a visual image in your mind, the more you think about that topic or conjure up the ‘vetoed’ image in your mind’s eye.

Daniel Wegner was so intrigued by Dostoevsky’s “polar bear” hypothesis that he designed a psychological experiment to test this 19th-century observation in a 20th-century laboratory setting.

During Wegner’s first thought-suppression study, participants were explicitly instructed not to think about a white bear for five minutes as they verbalized stream of consciousness thoughts. Throughout these five minutes, every time someone (who had been told, “don’t think about white bears!“) thought about a white bear, he or she was instructed to ring a bell. Most study participants rang the bell multiple times during the five-minute test.

Wegner and co-authors summed up their findings on the paradox of trying to suppress thoughts about white bears: “These observations suggest that attempted thought suppression has paradoxical effects as a self-controlstrategy, perhaps even producing the very obsession or preoccupation that it is directed against.”

A Million-Dollar Thought Suppression Question: What Is the Best Way to Stop Thinking Unwanted Thoughts?

Throughout the late-20th century, Wegner fine-tuned his “Ironic Process of Mental Control” theory. By the dawn of this century, it became clear to Wegner that people were hungry for some take-home advice based on the paradoxical findings of his “white bear” experiments. I am one of these people. Anecdotally, everyone reading this probably has a specific unwanted memory or something you tend to ruminate about that you’d like to think about less via successful thought suppression.

In 2011, Wegner gave a presentation at the American Psychological Association’s annual convention that laid out five specific strategies he recommended for helping to “suppress the white bears.” These include:

Wegner’s fifth recommendation of “exposure” is based on the counterintuitive hypothesis that if you force yourself to consciously focus attention (for a brief period) on thinking about something you’re ultimately trying to forget, the unwanted thought is less likely to pop into your mind at a later date. “This [exposure] is painful,” Wegner said in a 2011 APA statement, “but it can work.”

Although Wegner’s work on thought suppression wasn’t neuroscience-based, recently 21st-century, state-of-the-art fMRI research from the University of Texas at Austin reaffirmed that exposure (purposely thinking about unwanted memories) may, in fact, be the most effective way for someone’s brain to forget about proverbial “white bears.”

A new fMRI-based study on successful thought suppression, “More Is Less: Increased Processing of Unwanted Memories Facilitates Forgetting,” was published today in the Journal of Neuroscience. This research was conducted by first author Tracy Wang of UT Austin along with senior author Jarrod Lewis-Peacock.

Notably, Wang and her colleagues found that successfully discarding specific information or unwanted memories from the brain takes moremental effort than trying to retain visual images. 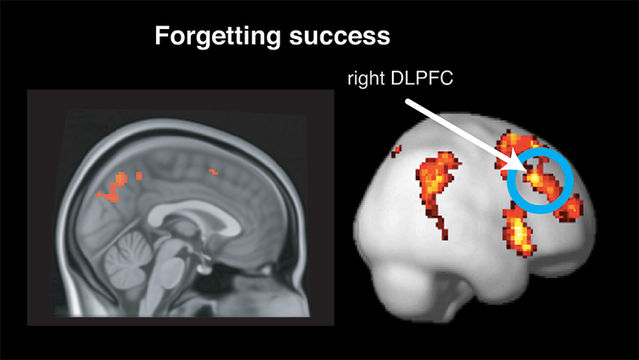 A press release from the Society of Neuroscience summed up the latest findings on successful intentional forgetting from Jarrod Lewis-Peacock’s cognitive neuroscience laboratory (The LewPeaLab) at UT Austin:

“Tracy Wang and colleagues instructed healthy young adults to remember or forget images of scenes and neutral faces. An analysis of functional resonance imaging data revealed forgotten images were associated with stronger activation of the visual cortex than remembered images. But not too strong – forgetting was most successful when this brain region was activated at moderate levels. The research provides evidence for a forgetting strategy that involves activation, rather than suppression, of unwanted information. This provides a new link between the voluntary control of visual attention and the long-term fate of memories.”

“We found a perhaps counterintuitive result that the intention to forget a memory is associated with increased memory activation of that memory as compared to the intention to remember a memory,” Wang and her co-authors stated in their paper’s conclusion. “We found that forgetting occurs more often when a memory has a moderate degree of activation (vs. too high or too low) following the instruction to forget. This highlights the contribution of an automatic memory weakening mechanism to deliberate forgetting, and it suggests an alternative strategy for successful forgetting: to weaken an unwanted memory, raise (rather than suppress) its level of activation.”

The recent fMRI-based discovery that increased processing may be required to forget unwanted memories (Wang et al., 2019) from the LewPeaLab at UT Austin advances our neuroscience-based understanding of Wegner’s ‘white bear’ observations and his iconic, “ironic process of mental control” (1994), thought suppression theory.

Now that they know there’s a sweet spot (e.g., not too much, not too little mental attention) for optimal thought suppression, future research from the LewPeaLab will focus on best practices for successfully forgetting unwanted memories. Jarrod Lewis-Peacock’s team at UT Austin recently began a neurofeedback-based study that tracks how much attention someone is giving to various types of memories

“This will make way for future studies on how we process, and hopefully get rid of, those really strong, sticky emotional memories, which can have a powerful impact on our health and well-being,” Lewis-Peacock said in a statement. “We’re learning how these mechanisms in our brain respond to different types of information, and it will take a lot of further research and replication of this work before we understand how to harness our ability to forget.”