New Study Pinpoints Why Sleep Is Often the Best Medicine 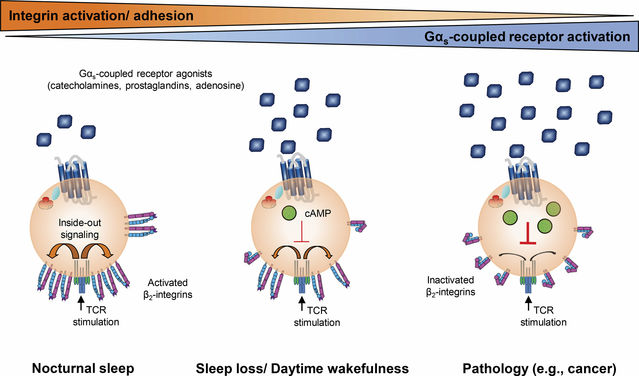 This diagram shows how the effects of Gαs-coupled agonists on T cells can be influenced by sleep or disease.
Source: Dimitrov et al., 2019

“A good laugh and a long sleep are the best cures in the doctor’s book,” according to an oft-quoted Irish proverb. We all know from life experience that not getting enough sleep increases our odds of getting sick and that a solid night’s sleep is recuperative. But, until recently, scientists haven’t really understood why sleep is often the best medicine for fighting off an infection or why good sleep hygiene keeps us healthy.

Today, a new study (Dimitrov et al., 2019) on the immunology behind sleep (and sleep deprivation) by researchers in Germany offers some fresh evidence-based clues about why “long sleep” has anecdotally been considered “one of the best cures in a doctor’s book” since temps immémorial.

Their paper, “GαS-Coupled Receptor Signaling and Sleep Regulate Integrin Activation of Human Antigen-Specific T Cells,” was published February 12 in the Journal of Experimental Medicine. This study was co-led by Stoyan Dimitrov and Luciana Besedovsky from the University of Tübingen’s Institute of Medical Psychology and Behavioral Neurobiology.

As the diagram above illustrates, the researchers were able to identify how sleep improves the potential ability of immune T cells to adhere to their targets firmly. These findings help to explain why sleep improves our ability to fight off infection and how other day-to-day factors that are linked to insomnia (such as chronic stress) might make us more susceptible to illness.

What Are T Cells? 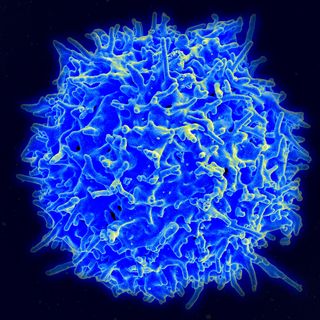 T cells are a type of lymphocyte and a subtype of white blood cells that play a crucial role in cell-mediated immunity and actively participate in the body’s overall immune response. Typically, when T cells recognize a specific target—such as a virus-infected cell—they activate something called “integrins” which are sticky, Velcro-like adhesion proteins that glom onto an infected cell and demolish it.

Integrins were first identified as a family of cell surface adhesion receptors in the late 1980s (Hynes, 1987). Richard O. Hynes of MIT has been a pioneer of integrin research (Hynes, 1992) for decades.

Since the early 21st century, scientists have continued to figure out how specific signals (Ley et al., 2007) activate the “stickiness” of integrins. Unfortunately, pinpointing specific signals that dampen the ability of T cells to firmly adhere to their targets has remained enigmatic.

In an attempt to crack this code, Dimitrov and colleagues decided to investigate how sleep, lack of sleep, and disease influence the ability of a group of signaling molecules called “Gαs-coupled receptor agonists” to regulate integrin activation of antigen-specific T cells in humans.

Interestingly, the researchers found that sleep up-regulates integrin activation via the suppression of Gαs-coupled receptor signaling.

On the flip side, specific Gαs-coupled receptor agonists—which include hormones such as epinephrine and norepinephrine along with proinflammatory molecules like prostaglandin (PG) E2 and PGD2, as well as the neuromodulator adenosine—prevent T cells from activating their integrins after recognizing their target in a dose-dependent manner.

“The levels of these molecules needed to inhibit integrin activation are observed in many pathological conditions, such as tumor growth, malaria infection, hypoxia, and stress,” Dimitrov said in a statement. “This pathway may, therefore, contribute to the immune suppression associated with these pathologies.”

“Our results demonstrate that a couple of hours of sleep loss suffice to reduce the adhesion capacity of antigen-specific T cells,” the authors concluded. “This finding shows that sleep has the potential to enhance the efficiency of effector T cell responses, which is especially relevant in light of the high prevalence of sleep disorders and conditions characterized by impaired sleep, such as depression, chronic stress, aging, and shift work.”

In addition to pinpointing why sleep is often the best medicine, Dimitrov and colleagues speculate that their recent findings (2019) might spur the creation of new therapeutic strategies and pharmaceuticals that could optimize the firm adhesion of T cells to their targets.

Hopefully, someday soon, the scientific advancement of integrin activation methods will be able to save human lives by prompting specific T cells to seek out, attack, and kill tumor cells as part of cancer immunotherapies and the treatment of other diseases.