Some people declare themselves to be morning larks, or early risers, and they effortlessly wake up at the crack of dawn and fall asleep earlier in the evening.

Others, however, are night owls, or evening people, who stay up until the early hours of the morning and wake up later in the day, if left to their own devices.

Previous research has shown that the night owls face some health risks due to their daily rhythms. These include a tendency towards poorer dietary habits, which, in turn, can increase the risk of metabolic conditions, such as diabetes.

Now, a study led by investigators from the University of Birmingham in the United Kingdom has found out how activity patterns in the brains of night owls are different from those of morning people. The study also highlights how these differences can impact their lives and levels of productivity in a world that typically favors early risers.

“A huge number of people struggle to deliver their best performance during work or school hours they are not naturally suited to,” notes lead researcher Dr. Elise Facer-Childs, previously of Birmingham University and now based at the Monash Institute for Cognitive and Clinical Neurosciences in Melbourne, Australia.

“There is a critical need to increase our understanding of these issues in order to minimize health risks in society, as well as maximize productivity,” she emphasizes.

The researchers have now published their findings in a study paper featured in the journal SLEEP.

For this study, the research team recruited 38 healthy participants. They divided the volunteers into two groups, putting 16 early risers into one group and 22 late sleepers into the second.

The researchers split the participants into these two groups based on their melatonin and cortisol circadian rhythms — the natural circulation of these two hormones affect sleep and waking cycles.

The researchers monitored the participants’ sleeping and waking patterns, and the volunteers filled in questionnaires about their rhythms. On average, late sleepers went to bed at 2:30 a.m. and woke up at 10:15 a.m. 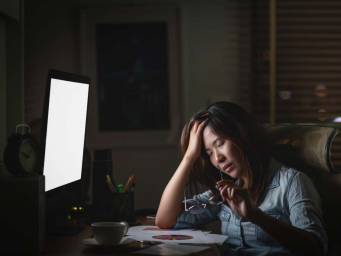 To assess brain activity patterns, the investigators asked the volunteers to undergo MRI scans. The researchers also tested the participants’ performance on various tasks they undertook at different times throughout the day to see how sleep-wake cycles affected daily functioning.

The team noticed a difference in brain activity patterns between the two groups, namely that night owls had lower resting brain connectivity in brain areas that scientists primarily associate with maintaining a state of consciousness. They correlated this with shorter attention spans, as well as slower reactions and lower energy levels.

Early risers performed better and had faster reaction times during morning tasks. They also declared themselves as being much less sleepy at that time.

On the contrary, as expected, late sleepers performed best and experienced the fastest reaction times around 8:00 p.m. However, even at the time when they were at their peak performance, night owls did not do much better than their early rising peers.

This suggests that throughout the day — or from around 8:00 a.m. to 8:00 p.m. — resting-state brain connectivity is affected in late sleepers, adversely impacting their productivity.

Social expectations ‘could be more flexible’

Dr. Facer-Childs likens the night owls’ state throughout the day to a form of constant jet lag, emphasizing that this may have a significant effect on their well-being in the long run.

“This mismatch between a person’s biological time and social time — which most of us have experienced in the form of jet lag — is a common issue for night owls trying to follow a normal working day.”

“Our study is the first to show a potential intrinsic, neuronal mechanism behind why night owls may face cognitive disadvantages when being forced to fit into these constraints,” she adds.

For this reason, the researcher argues that societies need to take a long, hard look at their organizational structures, chiefly in terms of working hours and how to become more accommodating to people’s individuals needs. This flexibilty should mean that night owls can put their best foot forward while avoiding adverse health outcomes.

“To manage this [situation], we need to get better at taking an individual’s body clock into account — particularly in the world of work,” Dr. Facer-Childs argues.

“A typical day might last from 9:00 a.m.–5:00 p.m., but for a night owl, this could result in diminished performance during the morning, lower brain connectivity in regions linked to consciousness, and increased daytime sleepiness,” she warns.

She further advises that “If, as a society, we could be more flexible about how we manage time, we could go a long way toward maximizing productivity and minimizing health risks.”